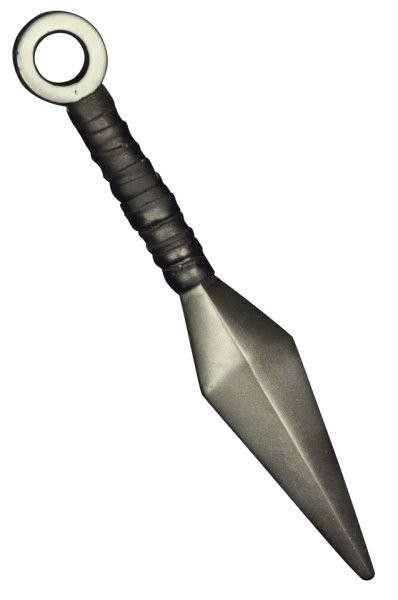 This product is currently not available.
Please inform me as soon as the product is available again.
$32.00 *

Description Evaluations 0
Description
The knife presented here was developed in the era Tensho in Japan. It is an ancient kind of... more
Close menu
Product information "Tensho Kunai"

The knife presented here was developed in the era Tensho in Japan. It is an ancient kind of trowel. The blade was not sharp, because the edges were used to break the plaster and wood. It was used by the common people as a tool primarily for Masons. However, its usefulness has evolved and the Japanese tradition recognize it as a cold steel used by ninjas, who used it as a throwing weapon. The Tensho Knife adds a sharp and deadly esthetic to any LARP outfit. Open pommel rings allow you to hook Tensho Knives onto your gear for easy access during combat. This black weapon is made with a pointed blade and a comfortable grip. Matching the look of spear points, the Tensho Knife complements larger weapons, making your character efficient at both melee and ranged combat. The distinctive edges of this weapon's blade give it a realistic and sharp appearance.