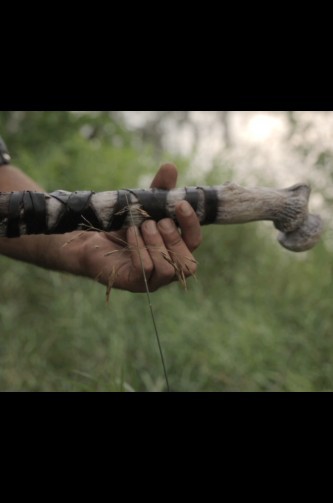 During the War of the North, Krug, the orcish hord warlord won numerous battles. Since he was always fighting at the front with his troops, moral was at its highest.

Towering at over six feet, the orcish warlord wielded a weapon that was well suited for his rank. An hammered steel blade whose reach was more than enough to terrify. The blade was mounted on the bone of a giant’s leg that had been slaughtered in battle by Krug himself.

After years of rampage and destruction, the orcish warlord disappeared without explanation. One thing was certain, no warrior, as formidable as it is, was and would have succeeded in defeating Krug.

Special thanks to Vincenzo Viscuso for the original name.

This evil-looking LARP sword from Calimacil is designed to function well as either a LARP weapon or a show or cosplay piece. With a design intricate and creative enough to suit a variety of characters and roles, its durable foam construction is also ideal for sparring. The bone hilt offers a chillingly unique touch that will make Krug, the Bone Splitter stand out in costumes and on the field of battle.